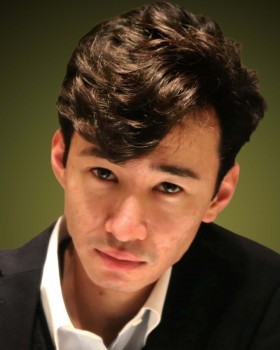 Robbin Reza started to play piano at the age of 5 with Sayano Ito. Following an invitation from Warren Thomson OAM, he made his solo recital debut as an 11 year old performing at the Art Gallery of NSW and the launch of the ninth Sydney International Piano Competition at the Seymour Centre. He is currently based in Cologne, Germany.

At the Sydney Conservatorium High School, Robbin studied piano with Daniel Herscovitch and trumpet with Leanne Sullivan. After receiving the Bessie Cook Piano Award and continuing to study with Herscovitch, he completed his bachelor of music performance at Sydney Conservatorium of Music with first class honours for his research and recital on modern Australian music.

In 2016, Robbin continued to study at the International Mendelssohn-Academy Leipzig in Germany with Arie Vardi and Jacques Rouvier after being receiving the Mendelssohn Scholarship. He has completed his master of music at the Hochschule für Music und Tanz Köln and is receiving additional tuition from Claudio Martinez Mehner and Nina Tichman as part of the Konzertexamen degree. Robbin also studies chamber music with Anthony Spiri and early music with Andreas Staier. His studies overseas were made possible through support from the Theme & Variations Foundation Scholarship, the Australian Music Foundation, DAAD (German Academic Exchange Service) and the International Lieven Piano Foundation Hamburg.

Robbin has participated in many competitions, including the Ku-ring-gai Philharmonic Orchestra’s NSW Secondary Schools Concerto Competition where he performed Carl Vine's Piano Concerto. He was New South Wales finalist in the 2013 ABC Symphony Australia Young Performers Awards; semi-finalist in the 2018 and 2021 ABC Young Performers Awards; and was winner of the 2016 Sydney Conservatorium Piano Concerto Competition playing Scriabin's Piano Concerto. In 2021, Robbin was selected for the Klassik Scholarship from the Werner Richard – Dr Carl Dörken Stiftung for a concert tour in Germany.

As a soloist and chamber musician, Robbin has performed throughout Australia, China, Europe and the United Kingdom and has played in live broadcasts and recordings for ABC Classic, Australia’s Fine Music Network as well as WDR and Radio Ljubjiana in Europe.