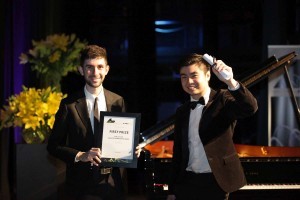 Alex Raineri and two other finalists, Daniel Le and John Fisher, performed to an audience of about 300 people, including Victoria’s governor Alex Chernov, at Eastbank Centre.

Mr Raineri, who said he liked to relax with a drink and good friends when not playing the piano, described Saturday’s award as ‘‘an honour and a privilege’’.

‘‘It’s been a huge week for all of us and I’m really thrilled to be standing here,’’ Mr Raineri said.

The performances were recorded by ABC Radio Classic FM and broadcast yesterday.