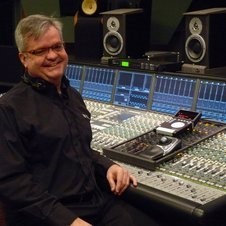 How long have you been in the sound/music/radio business: Oh, most of my life has been consumed with music so that's a fair chunk of time now. Started in the brass band in primary school in grade four. That makes it nearly fifty years? I’ve been with ABC Classic FM since 2007.  Gosh, how the time flies. Actually growing up I couldn't get enough music, technology, electronics etc. Absolutely loved it!

Description of your job and what it involves: The core part of the job is recording concerts and preparing them for broadcast. That's the simple explanation! There is lots to do in planning, preparing, packaging and writing. Then there's liaising with everyone especially the radio presenters, you want the concert to be presented well!

Examples of highlights broadcast around Australia: I guess The Ring stands out to me in some ways in 2013. I'd been lucky enough to play the two Adelaide seasons with the ASO under Tate and Fisch and lurked around the recording booth (as well as supplying technical support) enough to feel quite attached to it. When we had the opportunity to broadcast the 2013 Opera Australia ring cycle I was thrilled. Moments like that are amazing, but actually every event I have recorded and broadcast has some level of interest, satisfaction and energy, that's what makes the job so special.

Favourite places to hang out: Ooh, that's an interesting question, I probably enjoy spending time in my kitchen cooking, talking with family and friends, and it’s one of the most enjoyable things to do. If I'm not at home I love going back to South Australia, the vast numbers of fantastic wineries is a great way to spend holidays!

Favourite classical piano / music piece: I absolutely love French impressionist piano music, all the Chopin solo works, especially love the Brahms intermezzi (came to them through his symphonies, I know wrong way around!), the Beethoven sonatas, love Bach on the piano when I recorded Angela Hewitt, the list goes on! Just recorded Helene Grimaud with AYO playing Ravel, she was excellent.

Do you have a favourite classical musician / pianist / group in Australia: Ooh, I really enjoy ACO and ABO so much, terrific energy and vitality, MCO have done some great concerts, all of the orchestras of course I enjoy but I shouldn't be biased as I've played in all of the mainland (old ABC) orchestras at one time or another. So many great pianists that I've worked with but I still have a soft spot for Piers Lane, his dad taught me harmony at the Queensland Conservatorium and I also became a friend of Max And Pam (and Dene) Olding while studying there, wonderful musicians!

How long have you been attending the ANPA? Gee, I don't know, I'm guessing since 2008, yes, that sounds right.

Why is this Award so great/unique/interesting: Well, lots of reasons. I think it's driven by a pure love of what the piano can do and what it can be for aspiring players. It's very no-nonsense (non pretentious that is) and personal for the competitors. I think having the competition based out of Sydney and Melbourne gives it a far more intimate and unique quality plus the sense of ownership that Shepparton gives it. I love it.

The Gala Dinner – always fun and great food and entertainment. The Gala dinners are a credit to the team who put this competition together, absolutely amazing. Bravo!

Plus the Government House functions etc. I also like to get to the art gallery while I'm there, very enjoyable.

Logistically/technically what’s involved with your live broadcasts in Eastbank: Well, we don't often get the chance to go live any more but if we do, we quite often drag a satellite dish along and set it up to fire at the Optus satellite. The last time we went live, the dish broke. We actually ended up doing the first live broadcast on Classic FM via 4G technology on that occasion. Fortunately Shepparton has great 4G reception and we had a successful broadcast. These days the network wants this competition to go to our largest audience (which is on Sunday afternoon) so we pack up quickly and get back to Melbourne on Sunday morning to get the concert prepped for broadcast.

What can go wrong: Oh, anything and everything can go wrong from a flat tyre to a faulty microphone or the presenter getting sick or the computer failing! As I said, we had the satellite dish break last time, fortunately we were able to borrow the 4G pack from sport on the day. Alex (Stinson) had to drive back to Melbourne and go to the MCG and wait til they'd finished broadcasting, grab the unit and drive back to us. Thankfully it worked!

What happens when it all goes right (which it does every time): Smiling people, after all, it's all about the music.

Do you ever have a favourite pianist you follow at the Awards: I like to be surprised and not be too swayed by my own preferences. Let's face it, how many times have our own opinions been different to the judges!

Do you get a chance to get to know the musicians who come to Shepparton:   Not as much as I'd like. Remember that these people are totally focused usually and quite possibly don't have too much time or opportunity to socialise except perhaps afterwards. But I always enjoy the sense of kindred spirits, I've been there myself.

How many of you is needed to come to Shepparton to make the music happen: Well, on this occasion, we'll have one engineer, one producer and one presenter. That's usually all we need as everyone is pretty professional, well trained and on the ball.

Is there a team involved behind the scenes back at the ABC: Well, we have an organisation that is dealing with keeping the network on schedule, presenters, programmers, engineering and so forth. But as technology improves there is some overlap of tasks and we are all closer to the action these days, for instance, my job will be to write a report on the concert for the presenter, create a web article with a photo and a good angle on the concert, prep the files for broadcast and so forth. I'll probably speak with the presenter a number of times and coordinate with the people doing the programming of music surrounding the broadcast.