Warming up the Steinway for Television

Ben Austin one of our finalists for this year's Award was gracious enough to get out of bed early (not a small thing for a muso who went to bed after 2am from rehearsals!). 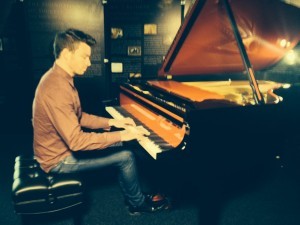 He played a delicious Steinway at the enormous showroom at Exclusive Pianos. He was interviewed by Ashylnn from ABC Television Breakfast News Program.

Mark O'Connor from Exclusive Pianos have been partners with the Award since we began.  Thank so much guys for all your support.

UPDATE: You can now watch the segment online on the ABC News website.