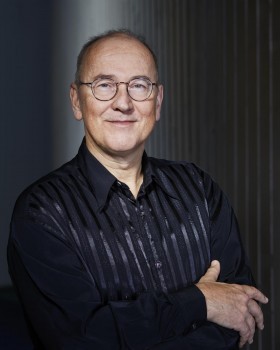 Born in Melbourne and educated at the Victorian College of the Arts, Ian Munro was taught the piano by Roy Shepherd, a pupil of Alfred Cortot. While completing his studies in Vienna and London, Ian won a number of prizes in international competitions (Barcelona, Lisbon, Busoni and Leeds), which led to solo performances across Europe, America and Asia as well as recordings for the BBC, Hyperion, Naxos, ABC Classics and Tall Poppies. In 2000, Ian returned to composing. His first major work Dreams (2002) was awarded Premier Grand Prix at the Queen Elisabeth Competition in Brussels. Since joining the Australia Ensemble, many of his works have been written for chamber ensembles and performed by a range of soloists and groups, including the Australian Chamber Orchestra, clarinettist Sabine Meyer, l'Orchestre National de Belgique, Brentano, Goldner and Modigliani string quartets and the St Petersburg Symphony. Ian's recent commissions include a flute concerto for the Melbourne and Adelaide Symphony Orchestras and a song cycle for soprano Sara MacLiver.