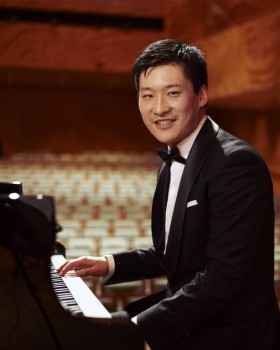 One of Australia's leading pianists, Kristian Chong has performed throughout Australia and the United Kingdom as well as in China, France, New Zealand, Singapore, Hong Kong, Taiwan, America and Zimbabwe. His wide-ranging performance schedule finds him equally at home as concerto soloist, chamber musician and recitalist. As soloist he has appeared with the Adelaide, Melbourne, Queensland, Sydney and Tasmanian Symphony Orchestras and orchestras in the United Kingdom, New Zealand and China, with recent performances including Saint-Saëns 2nd and Rachmaninoff's Paganini Rhapsody with the Melbourne Symphony Orchestra.

Kristian studied at the Royal Academy of Music with Piers Lane and Christopher Elton, and with Stephen McIntyre at the University of Melbourne, where he currently teaches piano and chamber music. Competition successes include the Symphony Australia Young Performers Award (keyboard) and joint-recipient of the 2000 Australian National Piano Award.